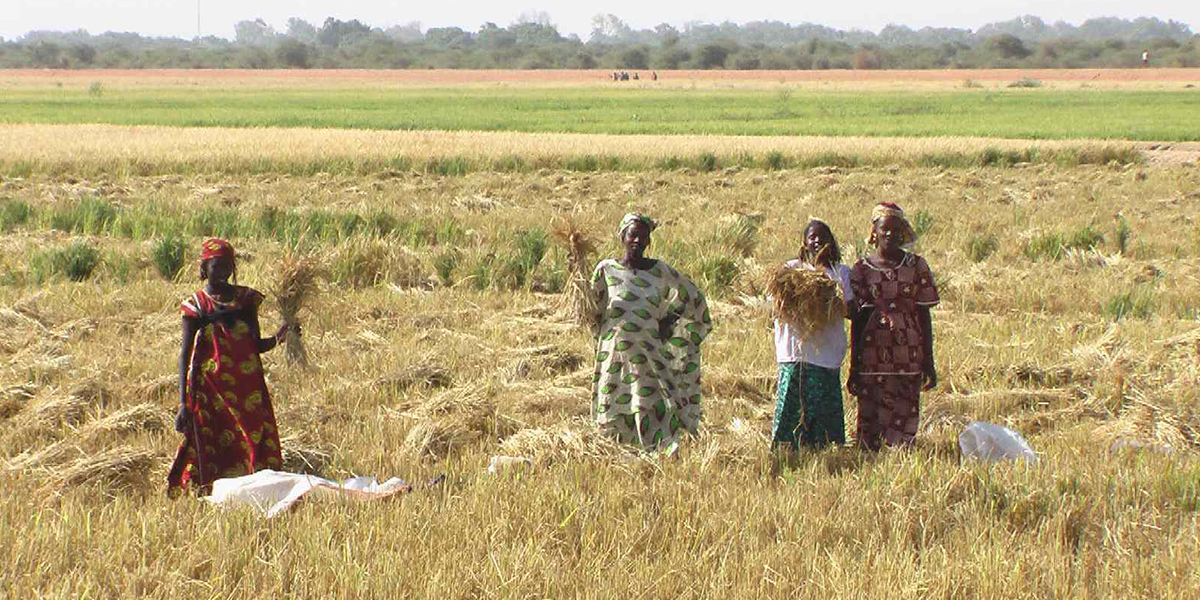 MCC’s $434 million Mali Compact (2007–2012) funded the $253 million Alatona Irrigation Project to increase agricultural production and productivity, improve land tenure security, and modernize irrigated production systems by expanding the Office du Niger’s irrigation system, supporting land titling, upgrading 81 kilometers of farm-to-market roads, and providing farmer training and financial services. This work was based on the theory that increasing production and productivity would boost farmers’ incomes. However, the compact ended early in April 2012 due to a military coup d’etat. This brief summarizes interim findings among farmers who were resettled within the Alatona.

Consumption for Conditions, Resources and Assets

This interim evaluation hypothesized that project interventions would have the following impacts in target villages:

Project households saw an increase of 1.6 hectares cultivated relative to comparison households. Male farmers primarily drove this increase. Agricultural production in the treatment areas relative to comparison areas also increased dramatically, growing by 15 metric tons per farmer for a tenfold increase. These production increases were associated with corresponding increases in the amount of fertilizer that treatment farmers applied, which matched the quantities of fertilizer received as part of the starter kits the project provided. Further data collection would be needed to determine if these gains in using fertilizer would be sustained after the project ended, especially given farmers’ limited ability to finance these large fertilizer investments without project support, and whether these effects can be replicated beyond the Alatona zone.

Consumption for Conditions, Resources and Assets

The interim findings provide inconclusive evidence of project impacts on real incomes and poverty. If poverty is measured as changes in asset holdings plus real consumption expenditures, then these results indicate poverty reduced by 19.6 percentage points among project households relative to comparison households. However, the decline was largely the result of assets the project transferred to these households, including new housing, livestock and equipment. The assets transferred were estimated at a total value of $2,764 per household, excluding the housing, land and community infrastructure provided through the project. The evaluation did not find statistically significant changes in other poverty measures.

With the end of the project and starter-kit grant availability, project households’ abilities to learn and improve agricultural skills may not continue since outcomes were heavily tied to the starter-kit grants. Additionally, it is unclear if new settlers and other residents of the irrigated perimeter will be able to sustain these results without these generous starter kits.

IPA designed an impact evaluation to assess effects from the Alatona Irrigation Project. The design used a propensity score matching methodology for project-affected people. A randomized controlled trial was planned for the broader beneficiary group to establish comparison groups, but it was never implemented since the evaluation was canceled. The exposure period was six–18 months for the interim round. Overall, approximately 2,373 households were surveyed within the Alatona zone and comparison group, with data collected in 2009 for the baseline, 2011 for the first interim round and 2012 for the second interim round.

With the 2012 coup d’etat and residual turmoil in Mali, IPA was forced to suspend data collection before the entire sample frame was surveyed. The evaluation was subsequently canceled due to the coup d’etat and concerns about the timeline of expected results that IPA put forth. MCC provided a cancellation memo. Given this situation, further evaluation activities have been postponed, but an independent evaluator was commissioned to perform an evaluability assessment.