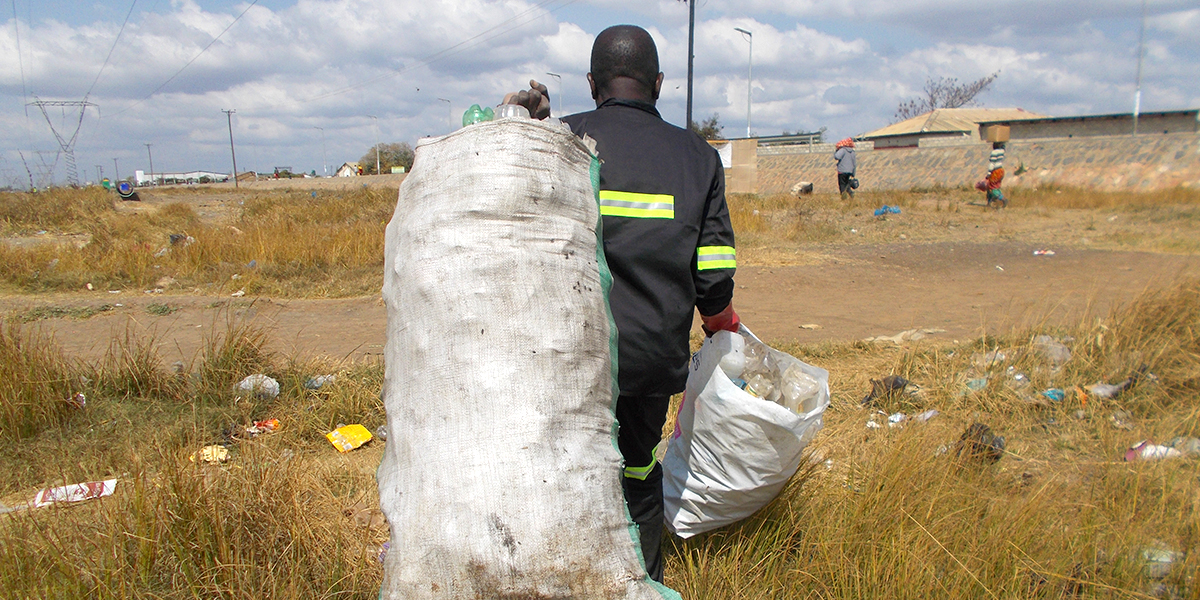 MCC commissioned the American Institutes for Research to conduct an independent performance evaluation of Zambian Breweries’ Manja Pamodzi program, which was funded through the MCC Zambia Compact. Full report results and learning: https://data.mcc.gov/evaluations/index.php/catalog/235.

Waste Accumulation in the Environment

Because of frequent turnover among collectors, aggregators were reluctant to give them personal protective equipment (PPE) until they demonstrated a commitment to the program, which had implications for collectors’ safety and productivity. Fewer female collectors than male collectors received key PPE items, even though women were overrepresented as waste collectors.

Aggregators reported that they received strong support from Zambian Breweries throughout the program, but many continued to face challenges retaining collectors, aggregating enough waste to cover operational costs, and transporting waste to processing facilities.

Processors overall were satisfied with their involvement in the program. Those who processed more valuable forms of waste, such as high-density polyethylene (HDPE) and low-density polyethylene (LDPE), were more likely to say that volumes increased as a result of Manja Pamodzi than those who processed paper or cardboard products. Although some processors mentioned an uptick in waste received as a result of the program, all processors reported that they would have preferred to receive much more waste under Manja Pamodzi than they did because they need to take in a sufficient volume to operate effectively. Processors faced some challenges related to inconsistent and incorrect waste deliveries from aggregators.

Waste Accumulation in the Environment

Community members in targeted areas around Lusaka perceived an overall reduction in waste in their communities as a result of Manja Pamodzi collectors, and waste collectors collected approximately 3,800 tons of recyclable material between 2015 and 2018. Residents were happy with that reduction, given the association between waste accumulation and diseases such as cholera. However, a few community members believed that only the most profitable forms of waste were reduced.

The evaluator used a mixed-methods, pre-post design that included a survey of Manja Pamodzi waste collectors (both active and inactive male and female collectors), focus group discussions with active and inactive male and female collectors and local students, key informant interviews with program stakeholders, and a time-motion study to investigate the “typical day” of a Manja Pamodzi waste collector as well as overall waste collection efficiency. Data collected through these methods were bolstered by and triangulated with official program documents obtained from Zambian Breweries and the Millennium Challenge Account–Zambia. In total, the evaluator conducted 427 collector surveys, 63 key informant interviews, 35 focus group discussions, and eight time-motion exercises.

Manja Pamodzi implementation commenced in February 2015, and the term of the grant agreement under the Innovation Grant Program expired in October 2018, although the program has continued to operate as a separate entity. The evaluator conducted two rounds of data collection (in August 2017 and again in August 2018) to explore how program processes changed and to identify challenges, lessons, program modifications, and program successes throughout the program period. This represents an exposure period of approximately 3.5 years for the completed grant.