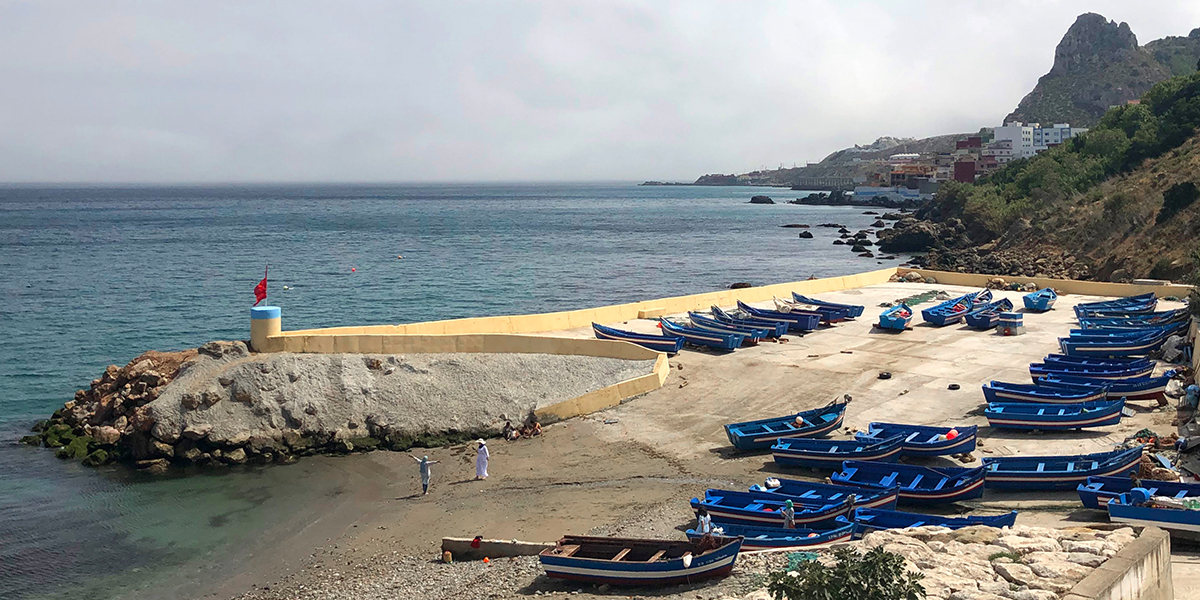 MCC’s $650.1 million Morocco Compact (2008-2013) funded the $111.2 million Small-Scale Fisheries Project to improve fish quality, the value chain, market access, and sustainability by constructing or rehabilitating 10 fish landing sites, 10 port facilities, 3 marine protected areas (MPAs), and 5 wholesale fish markets. The project also provided training and technical assistance to fishers and staff at the facilities. The activities were based on the theory that improving fish quality, through better handling and cold chain management, and increasing access to markets would allow fishers to obtain higher revenues.

This final evaluation was designed to answer the evaluation questions summarized below:

Most fishing sites were built or upgraded as designed and on time, and the quality of the infrastructure is high. However, seven sites were missing at least one component, one site is usable only for collecting seaweed and not for fishing, and one site is not operational at all. Maintenance varies, with ports being better maintained in general than fish landing sites. Most sites had ice machines, but some were not functioning and at many sites demand for ice exceeded the available supply.

The total number of individual boats fishing at project sites increased since before the project. In some cases, the increase in boats exceeded projections. Total fishing effort—measured in the number of fishing days—also increased. Overall sales volume and average daily sales volume did not increase, but sales of higher-value species increased at project sites and across Morocco.

Average daily and monthly revenues increased for fishers at project sites, but revenue increases were similar among fishers more broadly in Morocco, so the evaluation cannot attribute any increases in revenue to the project.

All markets were completed as designed, with some adjustments to the plans. While all markets had ice and cold rooms, ice production was not sufficient at a few locations and only one had a cold storage room that was below freezing at the time of assessment.
Market users believe that fish quality improved due to the ice machines and cold rooms, hygiene practices, and regulations restricting the sale of poor-quality fish. Improvements in fish quality at project sites resulted in an overall increase in fish prices according to respondents. Staff, vendors, and buyers said the volume of fish sold at wholesale markets increased and that there are more and a wider variety of vendors and buyers, but market data were available only since the opening of the markets, so these claims cannot be verified with quantitative data. Market officials reported that fish consumers bought a greater quantity and variety of fish. According to senior officials and buyers, the project created jobs in the fish sector including wholesalers, fishmongers, and market support staff.

Implementation went mostly according to plan, but artificial reefs were only built in one of the three MPAs due to implementation delays. Small-scale fishers aware of the MPA regulations reported following them, but stakeholders reported coastal fishers were not. Staff and fishers aware of the regulations, such as the prohibition against large fishing boats or the prohibition of certain types of fishing gear, reported regulations were not yet being enforced. The hotline for reporting infractions was established but used infrequently and the data recorded were not detailed. There were reported improvements in fish resource management and stakeholders reported marine health improved in the MPAs but data do not show differences in catch or revenues for sites near the MPAs compared with other sites.

The CBA models for ports and fish landing sites found net benefits were negative, largely because the total number of boats was lower than the closeout CBA model predicted, boat-level revenues did not increase, and costs to fishers rose slightly. The ERR for the wholesale markets was 18 percent, exceeding the closeout ERR of 16.7 percent, because most markets opened and started accruing benefits before indicated in the closeout CBA.

Time series analysis. The Fish Landing Sites and Port Facilities Activity combined high-frequency administrative and survey data to run a time-series regression model that accounted for annual and seasonal variation and included data from all fishing sites in Morocco to control for national catch and price trends.